Though it is too soon to say how well the bikes will do, critics are already predicting good things for the rejuvenated brand and the company in general. Some of the enthusiasm for the new Indian motorcycles in 2014 will likely stem from its pricing, according to bike critics. The new Indian Chief Vintage, for instance, will start at under $21,000 compared to the $36,000 charged by the previous owners of the brand. Similarly, the Indian Chief Classic’s entry-level price of $19,000 and the Indian Chieftain’s starting tag of $22,999 are both substantially lower than the entry prices for the same models in previous years.

Price, though, is not the only reason why the Indian motorcycles’ return will garner attention. With the new lineup, Polaris has gone to great lengths to overcome longstanding notions about the Indian brand as being outdated and archaic. The refreshed Chieftain, for instance, comes with cruise control, a keyless ignition system and a sound system that automatically raises and lowers the volume as the throttle is revved. The Chieftain now also features an electronically adjusted windscreen and support for an iPod or similar device.

Polaris has not disclosed horsepower figures for the new bikes, but there’s plenty to be had for riders who like brawny and muscular motorcycles. All three of the new bikes feature a huge 111-cubic-inch engine that delivers 119 pounds feet of torque and oodles of raw power. The new models also feature the familiar classic styling of the Indian brand down to the chrome-encrusted heavy metal finish, leather fixtures and the famous “war bonnet” on the fender skirts and front fender of the bikes. For the first time, the new Chieftain features hard-sided saddlebags and sleek fairings upfront.

With a curb weight of over 800 pounds, the new Indian motorcycle is not exactly lightweight or especially easy on gas consumption. But, it is likely to provide plenty of the same kind of raw thrills that made Indian bikes one of the premier brands in the motorcycle industry for several decades. Analysts predict that the rejuvenated Indians could make Polaris a fairly serious contender in the motorcycle market. Polaris acquired Indian Motorcycles three years ago, and has been on the warpath to restore the brand since then.

Polaris hopes to generate about $750 million in annual revenues from sales of the Indian motorcycles brand over the next five to seven years. That could be a tall order for the company, given its rather low-key performance in the motorcycle segment in recent years. The company’s Victory line of street bikes has never quite caught on in the market in the same way that its snowmobiles and ski vehicles have performed. In fact, prior to the release of the new Indian bikes, sales of Polaris-made motorcycles fell by 6 percent to a modest $50 million in 2012. Interestingly, this comes on the heels of Suzuki filing bankruptcy in America, though this was primarily for their automobiles and not their motorcycles. 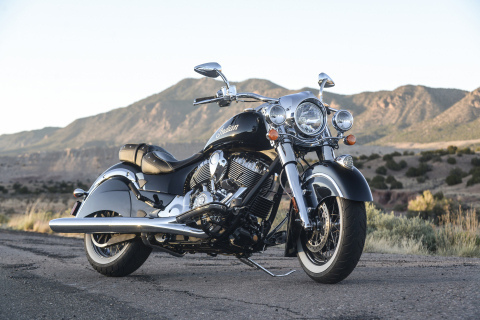