E15 fuel is a gasoline and ethanol mix that may soon be coming to a gas station near you. The name results from the 85%/15% gas/ethanol mix that is present within the E15 gas. While the new fuel mixture is considered controversial by many, it’s important to understand what ethanol fuel is, and how it works to really understand the pros and cons of the new ethanol/gas mixture. Many critics are reviewing ethanol fuel facts and deciding the main reasons for and against adopting usage of such gasoline.

What is Ethanol and How Does it Affect Vehicles?

Ethanol is a corn-based alcohol that is already found in gasoline tanks all over the country today. An ethyl alcohol that is the same as the type we ingest in margaritas and beer, ethanol is a less-efficient form of fuel for the ubiquitous internal combustion engine. Nevertheless, ethanol is a renewable resource, unlike the oil from which gasoline is created. Viewed by many in congress and some environmental groups across the country as a viable alternative to oil, ethanol is being phased in as a supplement to the unleaded gasoline used in the past forty years.

One problem that the new 15/85 ethanol mixture is the potential damage it can do to engines. For starters, the mixture is not recommended and cannot be used for any car older than 2001, thereby making its widespread and wholesale adoption unlikely in the near future, as many vehicles on the road are unable to run properly with the fuel alternative. Likewise, larger displacement engines, like those in trucks and SUVs, cannot run on this mixture either, and it will damage the engine if used. The alcohol in the ethanol is also believed to be corrosive to many of the parts in the engine, thereby leading to decreased engine life. Similarly, the water present inside ethanol can build up in gas tanks if the engine is not burning at peak efficiency, leading to damage to the fuel system and engine.

Questionable Benefits and a Slow Uptake

Pricewise, ethanol is cheaper by the gallon then gasoline, to the tune of almost a dollar a gallon. This is, however, only true on the wholesale level, and the relatively small amount that is in every gallon of gas really means that what you pay at the pump is only a few cents less than you would pay when buying pure gasoline. This minute cost savings is offset by the aforementioned inefficiency of ethanol/gasoline mixes as compared to pure gasoline. The 15/85 ethanol mix that will soon be coming to e15 stations across the country will decrease gas mileage by about 5% overall from pure gasoline, and another 1.5% less than the current 90/10 mixes found across the country. This means that, for less money, you get worse gas mileage, making the change essentially a wash.

With all this, the benefits of 15% ethanol gasoline in modern cars seem to be few. The technology may be successful as the engine evolves to meet it, but, for many vehicles on the road today, the mixture is likely to do more harm than good. 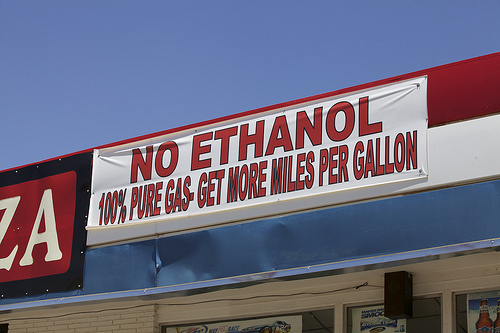