Home > Blog > Distracted Driving: The Dangers of Texting and Driving

Distracted Driving: The Dangers of Texting and Driving

The National Highway Traffic Safety Administration (NHTSA) has repeatedly found that distracted driving is far and away the number one cause of accidents, both fatal and otherwise, in America. Included under the term distracted driving is a whole host of dangerous activities, from eating, looking at scenery, rubbernecking, talking to others, daydreaming, adjusting the radio, and any other action which takes your exclusive attention off the road. While distracted driving is not new, one form of it is: driving while texting. Brought on by the proliferation of cell phones in the past decade, texting and driving is seen as a major public health issue, as the practice is so inherently dangerous. That said, let’s take a look at some of the reasons why texting and driving is so dangerous, and some of the ways the NHTSA and other agencies and organizations are trying to combat the problem.

The fact that texting while driving is a dangerous practice is not exactly an earth-shattering revelation to anybody, but the scope to which it contributes to dangerous situations, crashes, and deaths is where the problem really begins to take shape. The Virginia Tech Transportation Institute released results from a study in which it found that texting while driving led to a risk of a crash 23 times higher than those who were not driving distracted. The Harvard Center for Risk Analysis says that texting and driving accidents cause over 3,000 deaths and 333,000 injuries a year. The NHTSA reports that sending or receiving a text takes the driver’s eyes off the road for 4.6 second on average, and, at 55 miles per hour, this equates to the length of a football field. This distraction leaves plenty of time to slam into the back of another car or drive off the road. The problem is so serious that it has been noted that stopping texting while driving is more effective than stopping drunk driving, as multiple studies have shown that texting while driving actually increases reaction time more significantly than driving while legally impaired.

Given these grim statistics, knowledge of the problem and changing the culture of behavior have been the main arm with which the problem of texting and driving are being fought. The problem is especially prevalent among teens and young adult drivers, who, in addition to already being less experienced, are more likely to use such technology. Nearly 50% of those 16 to 24 admitted to texting while driving, up from only 22% of those between 35 and 44. Thus, many advertising campaigns about awareness are focused on this group, ranging from ads of a relative displaying the last message a teen sent before being killed while driving and texting (often “hey” or a similarly unimportant equivalent), to PSAs about the statistics that make texting while driving so dangerous.

Even with awareness on the rise, the long arm of the law has reacted, with texting and driving laws trying to keep up with the dangerous practice. The state of Washington being the first to explicitly ban the practice in 2007, and, today, 39 states have laws banning texting while driving, and, in almost all cases, this is a primary enforcement violation, meaning police can pull people over for no other reason than texting. The rest of the states are being heavily pressured to enact similar legislation from a diverse range of agencies, from the FCC and the NHSTA, to ATT and Sprint.

It is hoped by government agencies, private companies and groups, as well as motorists all over the country, that the dual effort of law enforcement and driver education will help stem the inherently dangerous practice of distracted driving in general and texting while driving in particular. That said, look for a continued and increased campaign by both groups in the coming years in an effort to rid the practice from the streets of America. 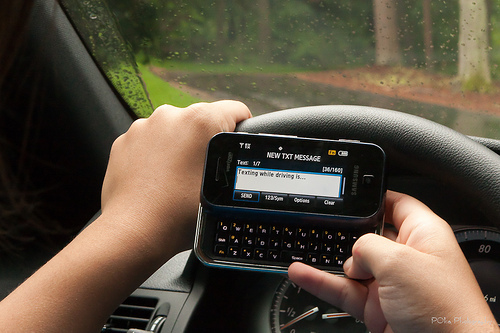