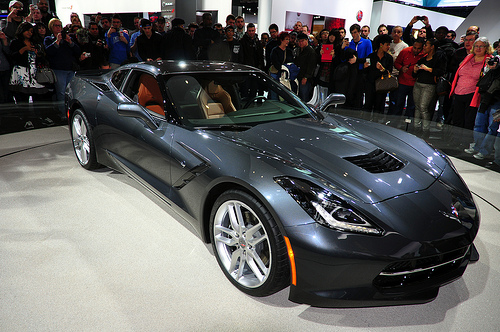 The quintessential American sports car, the Chevrolet Corvette, has survived in times both good and bad. An American automobile legend, GM’s flagship race car is celebrating its 60th anniversary this year in a big way. In an industry where models come and go in half a decade, the Corvette’s staying power is a testament both to its engineering and its indelible mark in the American experience. The latest incarnation of the Corvette, the 2014 Chevy Corvette C7 Stingray, may be one of Chevy’s best yet.

The Return of the Ray

The C7 is the seventh generation in the long line of Corvette production, and the Stingray moniker that the 2014 Chevy Corvette wears harks back to the name that previous generations of the automobile, like the iconic 1963 Corvette, used to wear. Chevy proclaimed they were reviving the Stingray moniker because this is the best Corvette they’ve ever made, though why they would ever claim otherwise goes beyond conventional marketing wisdom. Nevertheless, with bold styling, and a bold power plant under the hood to match, the 2014 Chevrolet Corvette is swinging for the fences in a big way.

The Corvette has long been the best ‘bang for the buck,’ as it were, in the entire car market. Though it lacked bells and whistles of European supercars, and certainly couldn’t take any corner like they could, the Corvette always offered up more horsepower per dollar than any automobile on the road. The 2014 Chevy Corvette Stingray is no exception. With a base horsepower of 450 delivered alongside 450HP of torque from a 6.2 liter V8, the Corvette offers Lamborghini Speed for a BMW M3’s budget. Keeping the rear-wheel drive, front-mounted engine was both an homage to Corvette’s history and a practical choice, as it kept the costs of the car down.

The design of the 2014 Chevy Corvette Stingray was intended to be bold, but not reinvent the wheel. The Camaro-esque taillight are the most obvious sign of this, but even a passing glance at the automobile instantly identifies it as a Corvette, thanks to basic body style that’s been the hallmark of the Corvette for over 40 years. The aggressive stance, bold vents, hood scoops, and Audi-like LED lights were part of a designed makeover to make the car appeal more to young drivers. Even Chevy’s marketing manager, John Fitzpatrick, knows that the Corvette has recently become a victim of its own success, and is now seen as an old man’s toy, and not a serious driving machine. Chevy, therefore, redesigned the car to be aggressive and bold, in an attempt to pull young professionals who are flocking to German competitors’ products.

A Fancy Interior and Priced to Sell

With an entry price expected in the $50,000 range, expect the Corvette to sell. The interior has also been given a rich redesign to match the boldness of the exterior, and matched with luxurious leather and advanced technology. If you like American muscle, with a huge engine and a makeover that finally gives the car aggressive styling to match its power, then you’d be hard pressed not to go with the Corvette. The flagship American car seems poised for another decade of prosperity: look for them at a dealership near you in fall of 2013.