Having your car stolen or vandalized can be a disheartening and, sometimes, expensive experience, but there are several measures you can take to mitigate the risk of becoming a victim. In 2011, about 715,400 motor vehicles were stolen nationwide according to the Uniform Crime Report from the FBI. That translated to roughly 230 auto vehicle thefts per 100,000 inhabitants. The most stolen cars and vehicles last year included the Ford F-250 Crew, the Chevrolet Silverado 1500 Crew and the Chevrolet Avalanche 1500. Other vehicles on the list included the Chevrolet Suburban 1500, GMC Yukon and the Chevrolet Tahoe. Insurance companies lost more than $4.3 billion, at an average of about $6,100 per vehicle, as a result of such theft.

Even though the numbers appear high, they are actually lower than previous years. In fact, motor vehicle thefts overall have declined steadily in the last few years, largely due to the introduction of ignition immobilizers in many new vehicles. An ignition immobilizer is, basically, a car theft prevention device that automatically switches on when your vehicle’s ignition is turned off. The immobilizer cuts off the ignition, the starter and the fuel, making it impossible to start the vehicle without the key. The device is designed to prevent car thieves from hot-wiring vehicles and driving them away. Close to 90 percent of all 2012 vehicles manufactured in the United States came equipped with ignition immobilizers.

Even if your vehicle is not equipped with similar technology, there are several things you can do to minimize the risk of becoming another motor vehicle theft statistic. An easy way to keep your car from being stolen is to use a steering wheel lock. Steering locks basically make it impossible to steer a vehicle and have proved to be a very effective anti-theft device. Most steering locks are made of high-strength steel and are resistant to sawing, prying and Freon attacks. They are also very visible and, therefore, are effective at keeping would-be auto thieves at bay.

Numerous alarms, tracking systems and electronic immobilizers are also available to deter vehicle thieves. Even if your car does not come with an ignition immobilizer, you can easily purchase and install an electronic “kill-switch” that functions more or less in similar fashion. Such anti-theft devices can be remotely activated and used to shut down a vehicle’s electrical system or engine using a wireless transmitter. Some models allow the starter system or the fuel system to be shut down via a wireless transmitter, thereby preventing a stolen vehicle from being driven. Many people also use car alarms that are designed to activate when someone breaks into the vehicle or gets too close to it. The devices come equipped with sensors that are capable of detecting a forced entry, a glass break or the presence of someone too close to the vehicle. If a threat is detected, the device sounds an extremely loud alarm to scare away potential car thieves.

Companies like OnStar and LoJack also provide vehicle-tracking services that can be used to track and immobilize a vehicle that has been stolen. Both companies provide radio transmitters than can be hidden inside a vehicle and activated if the vehicle is stolen. The transmitters allow the vehicle to be tracked and even immobilized remotely. Often, companies providing such services work directly with police in retrieving a stolen vehicle. 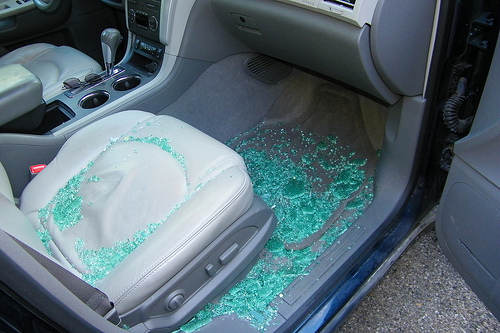