The 2014 Mercedes Benz CLA is the German automaker’s first real foray into the entry level luxury cars market and early reviews of the vehicle have been very positive. With a starting price tag of just over $31,000, the CLA is positioned alongside mainstream cars such as a well-equipped Honda Accord or a Toyota Camry. The car is smaller, lighter and less expensive than the Mercedes Benz C-Class, the company’s entry level offering for about two decades.

From the exterior, the new Mercedes Benz CLA has a longer wheelbase than the C-Class. However, it is much smaller on the inside and offers less legroom and cargo space than other cars in its class. In keeping with the Mercedes Benz pedigree, though, there is little that is small or cheap about the car. The interior cabin for instance, is freshly styled and borrows heavily from some of the sportier cars in the Mercedes portfolio. The cabin comes standard with MB-Tex synthetic upholstery and a stylish dark-grey trim with optional walnut, ash or aluminum trims.

Under the hood, the new CLA is powered by a turbocharged 2.0 liter, 4-cylinder engine that delivers 208 horsepower and a respectable 258 pound feet of torque. The engine is matched with a 7-speed automatic transmission that propels the car from 0 to 60 miles per hour in 6.9 seconds. The CLA is equally respectable on the fuel economy front. The car delivers a very respectable 26 miles per gallon in city driving conditions, 38 miles on the highway and 30 mpg of combined city and highway driving. The Mercedes Benz CLA is the first front-wheel drive Mercedes vehicle to be sold in the United States. Sometime next year, the company plans on releasing an all-wheel drive version of the vehicle as well.

In addition to the base model, Mercedes has also released a much more expensive, high-performance version of the CLA as well. The Mercedes Benz CLA45 AMG is powered by a hand-built variation of the turbocharged 2.0-liter engine found in the base model. According to Mercedes, the engine is the most powerful four-cylinder model on the market and is capable of producing a powerful 355 horsepower of thrust and over 330 pound feet of torque. Combined with a performance-tuned seven-speed transmission, the CLA45 AMG is capable of zooming from 0 to 60mph in less than five seconds. All the extra power and performance comes with a hefty price tag though. The CLA45 AMG starts at $45,000, and tops out at just over $60,000 when all the optional bells and whistles are added.

Among the few drawbacks with the new CLA are its relatively small size, small trunk size, and limited headroom, especially for backseat passengers. With a starting price of around $31,000, the CLA also offers less luxuries than a fully loaded Honda Accord would at the same price point. It is not also quite as smooth as the C-Class in highway driving conditions. But, given the brand cachet and the relatively competitive Mercedes Benz CLA price of around $31,000, most auto experts agree that the car is certainly worth the price. 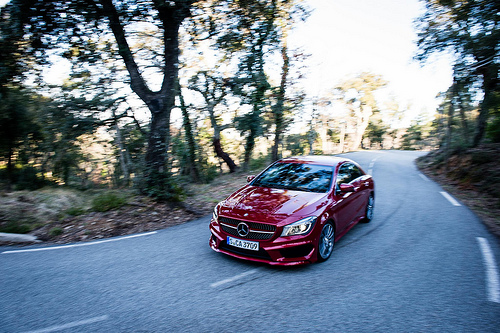